Marking time on the Bowery via Place Matters

Some great pictures of Lower Manhattan from the 1940's IN COLOR at the
How to Be a Retronaut blog.

Images of Mars Bar via Flickr and the NY Times

NY Times article from July 15th, 2011 that explains in detail the demo/construction project going on where Mars Bar is (was) located. 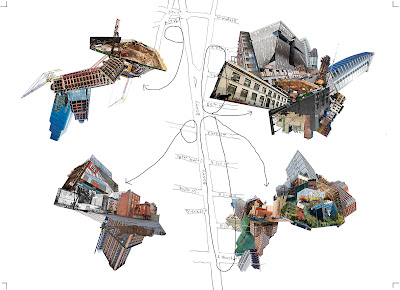 As a complement to CFEVA group show "Construct" at The Icebox project space in the Crane Arts building in Philadephia, I created a limited run set of informational postcards explaining my pieces [flo#7] (pictured above) and [flo#4].

I also wanted to create a post where non-New Yorkers could learn about the area that inspired the work. Here are some links to give some background information about the Bowery, what it symbolized for previous generations and what it has become.

• A good place to start is this article from the NY Times circa 2003 titled "Palimpsest Street" that describes the Bowery of old + hints at what is to come.


"It is an avenue unlike any other in New York, a hodgepodge of business and bohemia that runs through or alongside some of the city's most venerable and dynamic neighborhoods -- Chinatown, the Lower East Side, SoHo, NoLita, the East Village -- without really seeming to be a part of any of them. The Bowery is its own New York, at any moment a palimpsest of nearly every image, good and bad, that has defined the city."

• A NY Times Magazine article and slideshow circa 2011 explain what the Bowery has become:


"Where flophouses and derelict buildings once stood, luxury condominiums with prices of more than $2,000 per square foot are popping up. Empty lots, gas stations and family businesses have been swept away. Fancy hotels now charge upward of $400 a night for the privilege of crashing on the same Bowery where $4.50 bought a bed for the down and out. Luxury rental apartments — where one-bedrooms start around $4,000 a month — have replaced John McGurk’s long closed but not forgotten watering hole."

• wikipedia entry about the Bowery.


"In the 1940s through the 1970s, the Bowery was New York City's "Skid Row," notable for "Bowery Bums" (disaffiliated alcoholics and homeless persons)."

• Luc Sante's ode to a lost New York City "Low Life: Lures and Snares of Old New York" tells the story of New York's Lower East Side, circa 1840-1920, Which the Bowery was a part of.


"The work offers a poetic, humorous, even elegaic interrogation of the concept of the Bowery as urban blight."

• One of the best known landmarks on the Bowery (now defunct) is CBGB's which was famous as the birthplace of the American punk movement. 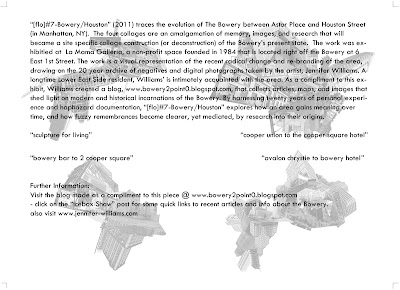 click to enlarge
Posted by jw at 5:39 PM 0 comments

Via Bowery Boogie.....http://www.boweryboogie.com/2011/03/public-hearing-regarding-bowery-historic-recognition/
Posted by jw at 11:16 AM 0 comments

What is the Bowery?

The Bowery is a street in downtown Manhattan, New York City.

Click on the "Icebox Show" post for some quick informational links about the history of the area to further understand the unbelievable transformation it has undergone within the last 10 years.

This blog explores the evolution of the Bowery, a street in downtown Manhattan in New York City, focusing on change which has happened between 1990-present.

It's a research tool for my piece [flo#7] - Bowery/Houston, which consists of four large scale photographic collages. These were originally created as site specific works that were shown at La Mama Galleria in January 2011.